TUESDAY, JULY 27th  -  I’m curating an online show for the “Music My Mother Would Not Like” series, a great little series hosted by Bruce Swan and Louise Baker.  My guests will be two marvelous songwriters, Rj Cowdery and Jono Manson.  It’s a free Zoom concert that requires registering … I’ll post the link here as soon as I have it

OK, then, the new album, if you fall, has been released in Italy and is already making some noise.  My cover of Francesco de Gregori's Rimmel has already been featured on RAI, Italy State TV and continues to get airplay around the country. I will be on a plane in two days for a three week tour with my Italian band, Paolo Ercoli.  Can't wait to get back there.  There will be another set of dates in Texas later in the year and in December the tour heads to Florida.

Here's an update on some upcoming shows looking into the summer

May 24 - June 4 - I'll be in Kerrville, Texas for my annual visit to the Kerrville Folk Festival.

May 28 - I'll be playing a mainstage set with guitarist Jack Williams at the Threadgill theater, splitting the evening with old friend Joe Jencks

2017 ended on an absolutely delightful note, the tour of Italy with Paolo Ercoli and Radoslav Lorković was a big success ...
Big thanks to Andrea Parodi, Pomodori Music and Appaloosa Records ...
More good things are coming together ... later this week (Thursday March 1) I'll be recording a segment of Art Fusion radio show recording at Artisan’s Santa Fe store on Cerrillos Rd for broadcast on the 3rd. Stop on by and say hello! 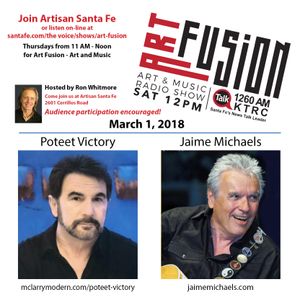 I'm back in Santa Fe now writing a new album tentatively titled "Carnival Town" ... the songs are coming along ...
Also spent some time this week in Jono Manson's Kitchen Sink Studio recording a cover of Townes Van Zandt's "Snowing On Raton" for a Townes tribute album coming out this spring in Italy on the Appaloosa label ...
Here's a pic from the session ... Terry Allen and Jono were recording tracks, too ... Mark Clark on drums, Jon Graboff on pedal steel and Ronnie Johnson on bass ... a great time! 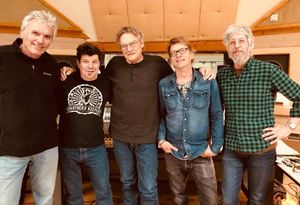 Looking forward to my annual trip to the Kerrville Folk Festival.  I will be there for a couple of weeks hanging out with the usual suspects at Camp Nashbill.
I will be hosting the Ballad Tree (on May 25th) ... I'll also be one of this year's New Folk judges (only minorly nerve wracking) AND i'll be appearing in concert on May 28th at the festival's Threadgill Theater with my buddy Joe Jencks ... youwza!!!!!
I will be the featured musician on an episode of the Art Fusion Radio Show in March ...
Heading over to Arizona in early May for some dates
And this fall i will be doing some Texas dates with one of my favorites, Rj Cowdery
and so it goes ...
PAST SHOWS INCLUDE
the Kerrville Folk Festival (main stage)
the Falcon Ridge Folk Festival (emerging artist showcase)
Russ and Julie's House Concert - Thousand Oaks, CA
Uncle Calvin's Coffeehouse - Dallas, TX
Anderson Fair - Houston, TX
ACMA Listening Room - Ft Myers, FLA
In The Music Room - Waxahachie, TX
Acoustic Caffeine - Smyrna, GA
Acoustic Concert Tours - Wylie, TX
Charles & Myrtle's Coffeehouse - Chattanooga, TN
the Bluebird Cafe - Nashville, TN
Swallow Hill Music - Denver, CO
Iron Horse Concert Hall - El Dorado, KS
Devil Mountain Coffeehouse - Walnut Creek, CA
4 Tours of Italy
"An evening listening to Jaime Michaels is like spending an evening in Neverland. You get experience forgotten wonder, joy, and romance for romance's sake, without the cares of the world weighing you down. Jaime is a masterful singer/songwriter!"
Michael Downie / Room With A View Concerts